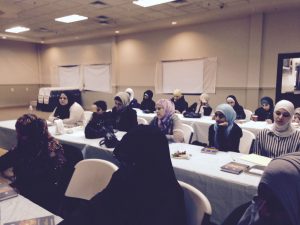 The ICD outreach committee is dedicated to spreading the word of Islam through workshops, educational classes, Islamic materials, and events. We also provide one-on-one mentoring, social and emotional support for new brothers and sisters and more. If you are interested in learning more about Islam, receiving educational materials or visiting the mosque for a tour, the outreach committee is located inside the Islamic Center of Detroit at 14350 Tireman in Detroit 48228. You can also reach the outreach committee by emailing at outreach@icdonline.org and they will return your call as soon as possible.

The ICD outreach committee works in partnership with the Muslim Enrichment Project, The Muslim Enrichment Project is a metro Detroit based non-profit organization that was founded in December 2010. Since beginning its operations, MEP has established a number of collaborative relationships with area Mosques and Islamic centers, student groups and other organizations. MEP has established regular classes, organized series of social (community) events while being engaged in a process of creating “community awareness” about its efforts. MEP provides mentoring, materials and classes to new Muslims. If you are a new Muslim and would like to register yourself with MEP, their website is www.muslimenrichment.org.

The ICD outreach committee is holding a Living Islam class for new Muslims every Thursday at 6:30 in the evening. Any changes today and time will be announced through ICD Newsletter.

If you are interested in learning more about Islam with greater detail you can visit www.kalamullah.com.
Believing in Allah gives our deeds and actions an enormous effect and influence. Our plans should not rely only on the power we can possess, the number of people we can gather, the money we can collect, or a building we can build or design, but on the righteousness that we uphold. The more we are righteous, possess good manners and good hearts, and practice constant repentance, the closer to the success we are. We will be successful in leading others and guiding them when we are successful in leading and guiding our own selves. We believe that we can make a difference at all levels and in different capacities when our actions are sincere and are according to the teachings of Islam. And we constantly pray that Allah would accept our deeds and make us righteous.

“If anyone travels on a road in search of knowledge, Allah will cause him to travel on one of the roads of Paradise. The angels will lower their wings in their great pleasure with one who seeks knowledge, the inhabitants of the heavens and the Earth and the fish in the deep waters will ask forgiveness for the learned man……”
[Abu Dawud]

A Brief Introduction to Islam

The word Islam means peace and submission to God. This submission requires a fully conscious and willing effort to submit to the one Almighty God. One must consciously give oneself to the service of Allah. This means to act on what Allah enjoins all of us to do (in the Qur’an) and what His beloved Prophet, Muhammad (PBUH) encouraged us to do in his Sunnah (his lifestyle and sayings personifying the Qur’an).

Islam is careful to remind us that it, not just a religion, but rather it is a way of life that must be practiced continuously for it to be Islam. The Muslim must practice the five pillars of the religion: the declaration of faith in the oneness of Allah and the prophet-hood of Muhammad (PBUH), prayer, fasting the month of Ramadan, charity to those less fortunate, and the pilgrimage to Makkah. Muslims also believe in the six articles of faith: belief in God, the Holy Books, the prophets, the angels, the Day of Judgment and God’s decree, whether for good or ill.

There are other principles which concern virtually all facets of one’s personal, family and civic life. These include such matters as diet, clothing, personal hygiene, interpersonal relations, business ethics, responsibilities towards parents, spouse and children, marriage, divorce and inheritance, civil and criminal law, fighting in defense of Islam, relations with non-Muslims, and much more.
Unlike other beings, man has the tendency to think that anything that is organized must have an organizer. Islam simply applies the same natural logic to the universe and the environment around us which has so many amazing and well organized inter-related systems that witness the existence of a powerful creator.

It is in this direction that Muslims believe in an unseen Ultimate Creator, source of all the physical and spiritual power that exists in the universe. We know about this creator not only through the powerful evidence of how organized the universe is but also through a line of prophets, including but not limited to Adam, Noah, Abraham, Moses, Jesus, and Mohammed. They came to draw our attention to him so that we may make the choice to believe by understanding and knowing that all that is organized must have an organizer and that this universe is the creation of the ultimate organizer: God the One, the Eternal, the Creator.

There are five major pillars of Islam: These pillars are the belief (Iman) in one God and that Muhammad (PBUH) is His messenger, prayer which are prescribed five times a day, fasting which is required in the month of Ramadan, charity (Zakat) which is given to those less fortunate, and hajj which is the pilgrimage to Mecca once in a lifetime if one can afford it physically and financially. All the pillars should be of equal height and strength and serve as the foundation of Islam.

Honesty, truthfulness, steadfastness and many other human moral qualities are the moral code of Islam. Thus, in order to be a Muslim, one should not only be practicing the pillars of Islam but should also have the highest possible attribute for being a good human being. Only then can a person have a strong, solid and unbreakable foundation.

Who was Muhammad (PBUH)?

The prophet Muhammad (Peace be upon him) was born in a noble tribe of Mecca in Arabia in the year 570 A.D. His ancestry goes back to Prophet Ismael the son of Prophet Abraham (peace be upon all of them). His father died before his birth and his mother died when he was six. He did not attend a formal school since he was raised first by a nurse as it was the custom those days, and then by his grandfather and uncle. As a young man, he was known as a righteous person who used to meditate in a cave. At age 40, he was given the prophet-hood when the angel Gabriel appeared in the cave. Subsequently, the revelations came over 23 years and were compiled in the form of a book called the Quran which Muslims consider as the final and the last word of God. The Quran has been preserved and unchanged, in its original form and confirms the truth in the Torah, the psalms and the Gospel. Although there are various translations of the Quran, the Quran in and of itself (the Arabic Script) is the same all over the world. One will never find different versions of the Quran.

The Qur’an is the final revelation from God to His creation and though its basic message is the same as that revealed to previous Prophets of Allah and contained in their books the Qur’an is universal in nature thus it applies for all times to come and in all situations. Muslims are not only exhorted to believe in the earlier Prophets but also the revelations to Prophet Moses PBUH in the Torah the Psalms of Prophet David and the Gospel revealed to Prophet Jesus PBUH in their original form. The Qur’an mentions many of the previous Prophets by name. In some instances, major parts of their individual lives are related while in others only relevant incidents are cited as a means of teaching and guiding later generations. In addition, it clearly conveys to us that there were many more Prophets who were sent by Allah. The Qur’an is the last of the Divine revelations sent down by God to mankind. It is primarily a book of guidance, source of knowledge and code of ethics from the Creator to His created.

Islam teaches that the path to spiritual development is open to all. This universal message for humanity fills hearts with hope and courage. At present, there are 1.5 billion Muslims worldwide and they form the majority in more than 50 countries in the world. Today Islam is the fastest-growing faith in the world. Its beautiful message is reaching millions from all corners of the earth.